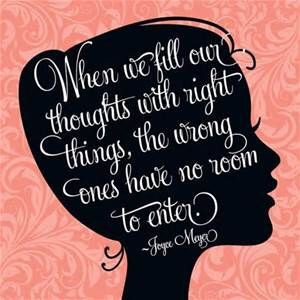 Our thoughts are powerful and they have an aroma that fill our minds. They either impart pleasant attractive scents that lead to enthusiasm, hope, and productivity or they impart putrid rotting scents that lead to lethargy, discouragement, and stagnation. The aroma that our thoughts give off impacts others through our words and actions. See,  all thoughts eventually transform into words and/or actions. So every place our voices are heard, we are either stinking up the atmosphere with negativity or releasing a sweet smelling fragrance of hope, faith and strength.I spent a great deal of my late teenage and early adulthood years ignorant of how powerful my mind was. I did not realize that the things that I had or did not have, tangible or intangible, were a result of my thinking. One of the first gifts my husband gave me when were friends was an introduction to the book Battlefield of the Mind by Joyce Meyer. I  devoured the concepts in the book. I was taken aback by the relevancy of her message. It was like she was illuminating the prison that my thoughts were constantly putting me into, and she was offering me the keys to unlock the cage forever! While I read the book, I realized there had been a hostile attack going on internally,  a tug-of-war of thoughts. My ignorance of the battle was costing me the victory! It was not so much that I was ill-equipped, it was my oblivion that held me in a state of captivity.

Reading that book started my journey toward thought reformation, and trust me when I say, it’s a never-ending journey. One of the most powerful concepts that I learned from the book was to be mindful of my thoughts, or as Joyce puts it to  “Think about what I’m thinking about.”  It’s been over 13 years since I first picked up that book to read it, but this concept has stayed with me. Being present in my thoughts has been the tool that constantly helps me to have better control over the destinations that my thoughts carry me to.  Because I am present, I can redirect the path of my thoughts in real-time. This is important because the sooner I can halt a lie that has formed into a thought, the sooner, I can receive truth. For me, truth is found in the Bible.

I mentioned that this has been an ongoing journey, and I truly mean that. In the past 13 years I have been more successful at being free from deadly thinking than others. But as my sister-friend Lavida sings,  I can assure you,  “I have come through the worst of it all.” It was approximately 7 or 8 years ago that I entered the fight of my life.  My light went dim. I cannot pinpoint what exactly happened, the assault was so sneaky and  gradual. All I can say is,  I looked up and I was over 320 lbs, and I did not have any desire to leave my house except to go to work  and that was only because it was non-optional. I avoided people as much as possible. I did not want anyone to see me. I can’t say how many things my husband attended alone. My emotions and negative thinking were in full control. For some reason, I thought I was stuck. I had been told most of my life that I had a “calling,” and I had concluded at some point that I had messed up all chances of that becoming a reality. I was lost. I was going to church a good portion of that time, but I was lost in the pew, and no one could help me because I smiled through it in public. No one knew I was dying. I hid it well.  During this time, I had a disgusting attitude.  I complained, fussed, and nothing  or no one could make me happy. I was ashamed of myself. It was from that weak place that God showed His strength.  He rescued me. He kept His promise never to leave me. I found life through spending quiet time with Him.

At some point, like the Prodigal Son in the Bible, “I came to myself.” I looked at where I was, and I knew I could not stay there and remain alive. My only hope was to run back to God in a real and vulnerable way. It was during that time that I  re-purchased Battlefield of the Mind. I became reacquainted with its concepts, and I fought my way out. I became relentless about living. I became focused on being free from the lies about myself and my life that I had adopted. I am thankful for a praying husband and a praying mother during that time. Surely their prayers carried me back to life.  My prayer then and still today is, “Purge me with hyssop, and I shall be clean: wash me, and I shall be whiter than snow” (Isaiah 51:7).

I called this “The Purge” because maybe you need to do some of this work. You may be able to relate to something that I have shared, and you may be realizing that you, too, need to purge your mind of the defeating thoughts that whisper lies to you. You may be realizing that your life is dependent upon you becoming free from self-pity, self- hatred,  and unhealthy self-criticism. The purge is all about dealing with the stinking thinking that is holding us back.

The definition of the word purge is,  “To rid of whatever is impure or undesirable; to cleanse; to purify.”  I can only tell you what worked for me. I had to dig deep. My wandering mind had gotten me into this position, so dealing with the mental bondage was the only way to become free. The ways I dealt with the mental bondage was spending quiet time with God in prayer,  reading the Bible and other Christian non-fiction books,  and coming out of hiding.  I had to be intentional about all of these things, and it took some time, but in time, I could see a huge difference. In fact, the work that begun then is still manifesting in my life now.

I don’t know what your exit strategy will be, but I want to encourage you to keep God at the forefront of your plan, and resist the urge to tackle this alone. My desire in sharing this with you is that you will discover there is hope, and that you would know,  you are not alone.

Thank you for reading this blog in honor of #TBT!

This is one of the first blogs I wrote when I first began blogging, and the message is still VERY RELEVANT!!!

I would love to start a conversation about this topic here in the comments section! Or, you can email me HERE!

Until Next Time, Keep your Hope living and active!